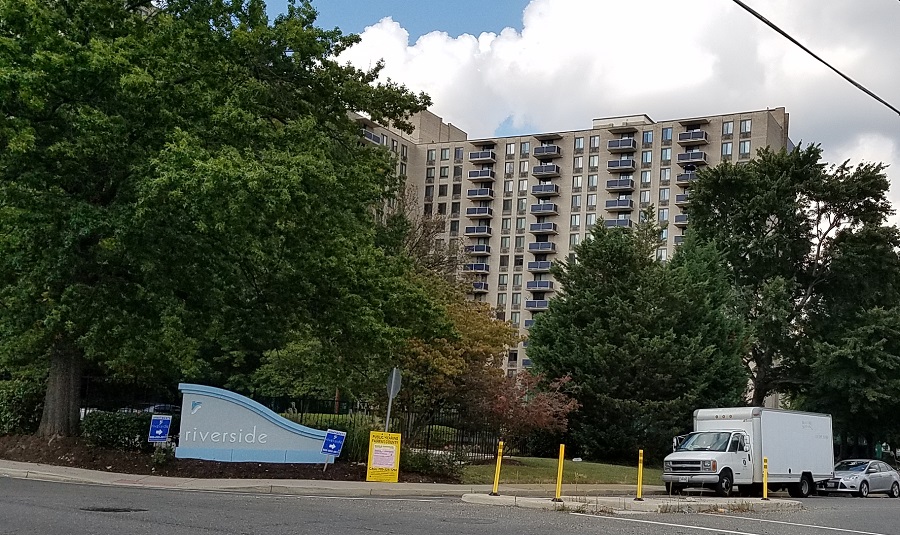 A view of the Riverside Apartments from the corner of Huntington Avenue and Old Richmond Highway.

The Fairfax County Board of Supervisors on Tuesday voted unanimously in favor of a plan to add five new apartment buildings and a public park to the Riverside Apartments complex in the Huntington area.

The project will significantly transform the existing Riverside property, which currently consists of three 15-story apartment buildings and a massive parking lot. Much of that parking lot will be removed to make way for the new buildings and the Cameron Run Waterfront Park, which will be built on Riverside’s property but operate as a public park.

The project also aims to make the complex, which is currently fenced in with no pedestrian or trail connections with the surrounding properties, better integrated with the Huntington/North Gateway area.

The approval of the Riverside project comes as the Huntington and North Gateway areas are poised for even more significant redevelopment. Multiple buildings in the area, including the “Taxi Magic” office building and the Travelers Motel, have recently been sold to development companies.

The Embark Richmond Highway envisions North Gateway as a “community business center” that will serve as a front door to the Richmond Highway area, and Riverside’s redevelopment is seen as the first step in that process.

“I think this is an opportunity that is indicative of the many great things happening in Mount Vernon [district],” Mount Vernon Supervisor Dan Storck said during his remarks before presenting the rezoning application up for a vote.

No citizens spoke in favor or in opposition of the project during the public hearing portion of the meeting.

Lee District Supervisor Jeff McKay cited the Huntington Levee project, scheduled to be completed in spring 2019, as a significant improvement to the area that signaled to developers the county’s commitment to redeveloping the Huntington area. The levee project figures into the Riverside redevelopment, with a new eight-foot wide trail along the length of the levee connecting to the waterfront park along Cameron run.

“Their are few areas of the country that are getting as much attention as Huntington and the North Gateway areas,” said Lee District Supervisor Jeff McKay. “This is one more reason this area of the county is thriving and doing well.”

For more details about the Riverside redevelopment plan, please see this story.