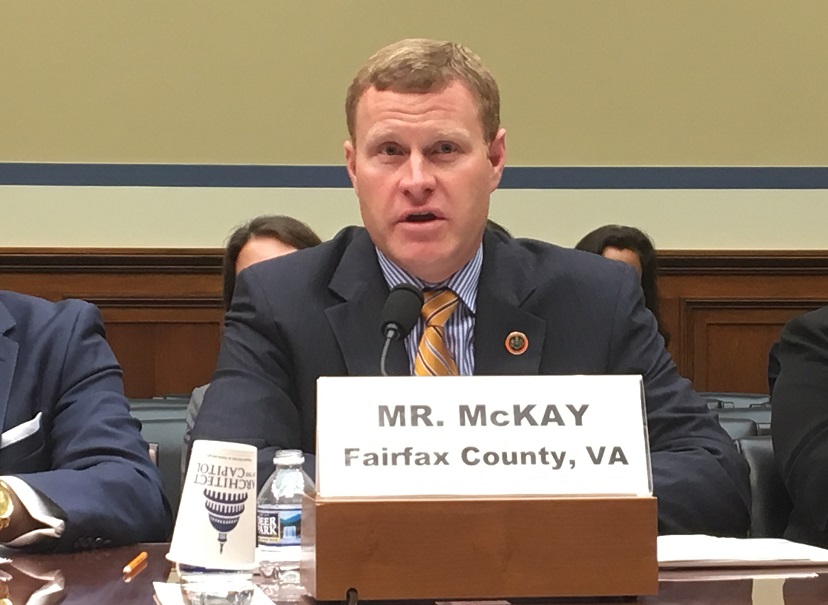 Lee District Supervisor Jeff McKay officially announced his intention to run chairman of the Fairfax County Board of Supervisors on Thursday.

McKay, a Democrat, will be running to replace current chairman Sharon Bulova, who announced earlier in the day that she will not be running for re-election.

In his announcement, McKay cited the need to overcome the “hateful rhetoric and divisiveness” in the current political climate, and said he would work to ensure Fairfax “works for all” community members.

“I have the knowledge, experience, and relationships to make Fairfax County a progressive national leader in public education, inclusiveness, job growth, and quality of life,” McKay said. “We’ll protect our environment and fight for affordable housing, ensuring our county continues to be the success story of our region, state, and country.”

McKay is currently in his third term as Lee District supervisor, and is chair of the Board’s Budget Committee and Legislative Committee, and co-chair of the Committee on Community Revitalization and Reinvestment. He played an integral role in the passage of Embark Richmond Highway, a sweeping update to the county’s comprehensive plan designed to bring significant transportation and zoning changes to the Route 1 corridor.

Bulova, who has served as board chairman since 2009, and on the board since 1988, endorsed McKay’s bid.

“In our time on the Board of Supervisors, Jeff McKay has always fought for an equitable Fairfax,” Bulova said. “Jeff is a dedicated public servant who is not afraid to roll up his sleeves and work hard to find the best solutions within our Community. He’s fought to fund our schools and improve transportation options in the county. He has my full support.”

“Jeff and I worked closely together, and he understands how to work with other members of the Board and the Community to get progressive results,” Connolly said.

McKay, 43, is a lifelong resident of Fairfax County. He grew up in the Woodlawn area and now lives with his wife and two children in the Hayfield area. He won his first election in 2007, taking over for the retiring Dana Kaufman, who McKay served as chief of staff for 11 years.

In addition to his work on the Board of Supervisors, McKay currently serves on the Northern Virginia Regional Commission (NVRC) and the Virginia Railway Express Board. He is second vice president on the Virginia Association of Counties (VACo) Board of Directors, and is the chair of the VACo Transportation Committee. McKay also serves on the Northern Virginia Transportation Commission (NVTC).

McKay represented the county on Metro’s board of directors from 2008-2012, and also served as vice chair on the Virginia Department of Rail and Public Transportation (DRPT) Transit Capital Project Revenue Advisory Board.

McKay is a 1993 graduate of James Madison University, where earned a degree in Public Administration. He’s also a graduate of the Sorensen Institute of Political Leadership at the University of Virginia.

Bulova’s and McKay’s announcements mean that at least four of the 10 Board of Supervisors seats will have new occupants in 2020. Braddock District Supervisor John Cook said last month that he is not running for re-election, and Providence District Supervisor Linda Smyth announced her retirement at Tuesday’s board meeting.

McKay is the first candidate to officially announce a run for chairman, although The Washington Post reported that Springfield District Supervisor Jack Herrity, a Republican, is considering running.

So far no candidates have announced their intention to replace McKay as Lee District Supervisor.