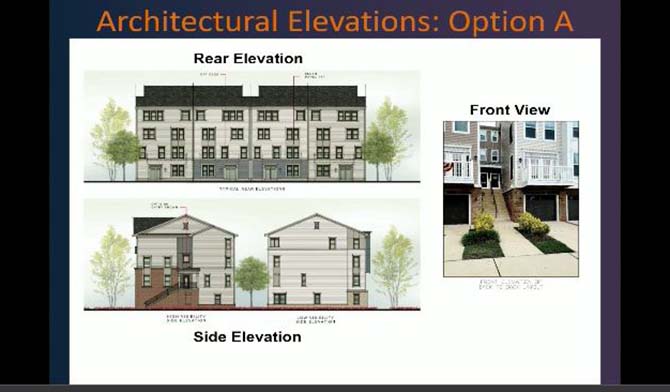 Options A for the development. (Fairfax County image)

The Fairfax County Board of Supervisors on Tuesday unanimously approved a proposal to build a 62-unit multifamily development near the Huntington Metro station.

Northpoint Realty Partners had filed a request to Fairfax County to rezone a piece of land along Metroview Parkway from commercial to residential in order to allow for the Huntington Crossing development to go forward. The land, which sits about a block north of the Huntington Metro, currently consists of grassy and wooded areas. It shares boundaries with Cameron Run to the north, the Midtown Alexandria Station condominiums to the south, The Parker apartments to the west and a townhouse development to the east.

Despite the unanimous vote, there were some concerns voiced by Mount Vernon District Supervisor Dan Storck and county staffers from the department of planning and zoning. The primary point of contention is a missing section of sidewalk along the east side of Metroview Parkway that the developer has proffered to construct. The sidewalk would allow residents to walk to the Huntington Metro without crossing Metroview Parkway to use the sidewalk on the other side.

However the missing section sits on the property of Midtown Alexandria Station, and no formal agreement is in place yet between the two property owners for an easement to allow the sidewalk to be built. The Huntington Crossing Developer has indicated they are willing to pay for the construction of the sidewalk, but do not want to pay for the easement.

Storck pressed for more information about the sidewalk construction plan on Tuesday, saying that it’s a critical connector for residents who will be walking back and forth to the Metro.

“Pedestrian access is essential in this kind of corridor,” Storck said.

An attorney speaking on behalf of the developer said the sidewalk agreement is a priority, and the developer has agreed to put $63,000 in escrow — the estimated cost of building the sidewalk — in order for the county to construct the sidewalk if an agreement can not be made in a designated period of time with the Midtown Alexandria owner.

“We have worked very hard on this process and I want to address the sidewalk,” said Sara Mariska of Womble Bond Dickinson, noting that the developer has already met with the Huntington Community Association and the Midtown owner. “Our goal as an applicant is to construct that sidewalk.”

Storck said the dispute was not enough to hold up a vote, but that more needs to be done to make sure the sidewalk is built in a timely fashion.

“I’m still not fully confident that it’s going to be done,” Storck said. “But I’ve gotten a clear commitment from the applicant and I know that county staff believes that can be built for the $63,000 that has been set aside.”

A spokeswoman for Storck said Thursday that the supervisor will follow-up on the matter.

“Our office will likely initiate a future meeting with Midtown and NRP Huntington to facilitate the conversation about easements and sidewalk,” said Camela Speer.

Two design plans are being considered by the developer, both consisting of 62 units. The first option would feature back-to-back four-story units, while the second option would have the units stacked. Each option would include a one-car garage with units having a maximum building height of 45 feet.

No decision about which design will be used was announced at Tuesday’s meeting.

A large part of the 6.32-acre property falls within the 100-year floodplain for Cameron Run, as well as an environmentally protected area. None of the buildings would fall in those areas, however, and 4.5 acres of open space are part of the proposal. That open space would include and urban park and “recreation lawn,” as well as a pipe stem grass trail allowing access to the development from the east side of the Midtown Alexandria condos.

The environmental conditions, plus the varying sizes of the neighboring community — as well as the Yellow Line bridge that runs next to the property –made the project a difficult one to plan, Mariska noted. Originally a 360-unit apartment complex was planned for the site, but that plan was shelved in 2017.

“We’ve been working on this site since about 2014,” Mariska said. “It’s a very challenging site.”

A number of neighborhood organizations, including the Huntington Community Association and the Mount Vernon Council of Citizens Associations, support the project. The Southeast Fairfax Development Corporation also signed off on it.

There were no speakers either for or against the project during the public hearing portion of the meeting.