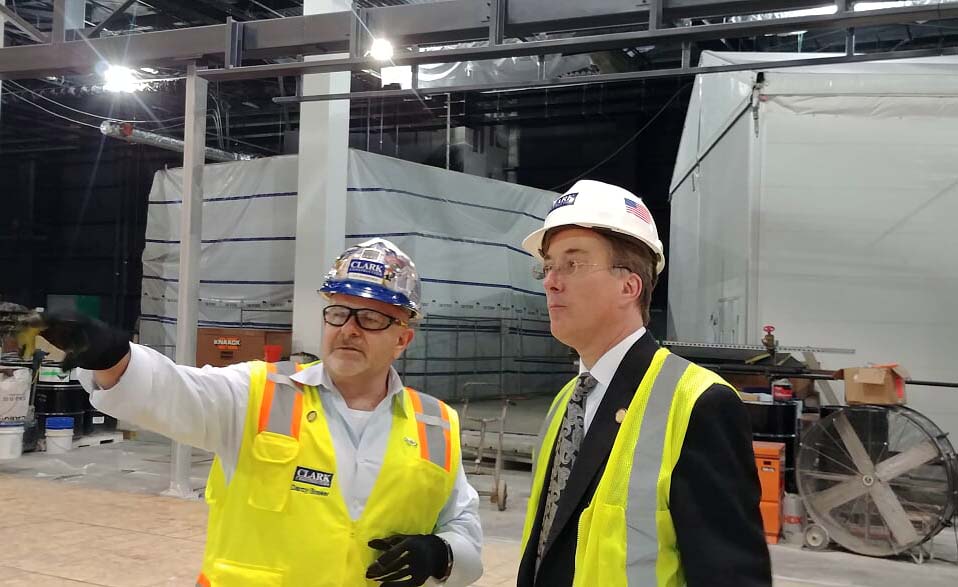 This column was submitted by Del. Paul Krizek (D-44), and does not necessarily represent the views of Covering The Corridor.

There is no more important task than honoring the men and women who have dedicated their lives to the service of our country. Earlier this month, I had the great joy of touring the construction site for the upcoming National Museum of the United States Army at Fort Belvoir. This museum will celebrate the sacrifice of the over 30 million men and women who have served in the U.S. Army since 1775.

It was incredible to see all the progress they have made on the museum which is scheduled to open in 2020. I want to share with you my experiences and some photos from that day and what to look forward to upon its opening. I guarantee it will be a world class museum and a fantastic experience for every visitor.

The museum will be an astounding 185,000 square feet and a technological marvel with exhibits that will captivate audiences of all ages. There will be unique selections of 15,000 pieces from the Army Art Collection and 30,000 artifacts, documents and images. Most of these rare and priceless pieces have never been seen in public. For war buffs, there will be exhibits that focus on each of our nation’s major conflicts from the Revolutionary War up to the Iraq and Afghanistan wars.

One of the most poignant displays to me will be the Soldiers Stories Gallery.

On the first floor, there will be an interactive learning center with classroom space and simulated rescue mission activities. This will be a great way to engage children. One of the most poignant displays to me will be the Soldiers Stories Gallery. The Soldiers Stories Gallery will have 41 pylons with individual soldiers faces etched on them along with biographical information and the history of their service. These individuals will exemplify the seven core values of the Army: loyalty, duty, respect, selfless service, honor, integrity, and personal courage.

A display that will truly make this museum stand out from other military museums is the Army and Society Gallery. This gallery will examine the symbiotic relationship that has existed throughout our history between the Army, its government and the people. For example, one of the stories recounted in this exhibit will be of how General Washington convinced his officers to abandon any ideas of seizing control of the government. This decision solidified the ideals espoused in the Declaration of Independence and helped America avoid the pitfalls that many new nations face.

Outside the main museum there will be a Path of Remembrance which will be a scenic walkway lined with commemorative bricks honoring past and present soldiers. Then there will be a grandstand and parade ground with outdoor space used to display historic and modern tactical maneuvers, battle reenactments, and demonstrations that are too large for the inside of the building.

At the end of my tour, I only wished the museum were opening sooner so I could see all these amazing exhibits now!

At the end of my tour, I only wished the museum were opening sooner so I could see all these amazing exhibits now! The exhibits will be a great way to educate our younger generations about the sacrifices made by men like my father, who started out in the U.S. Army Air Corps and retired as an Air Force Colonel, and the other men and women of the Army, which allow us to enjoy the freedoms we do today.

Additionally, the interactive exhibits will be a great way to cultivate the next generation of those interested in serving our country. The National Museum of the United States Army will be a tremendous addition to our Commonwealth and I can’t wait to go see it when it opens in 2020. To join the volunteer program or donate to the museum please visit armyhistory.org.