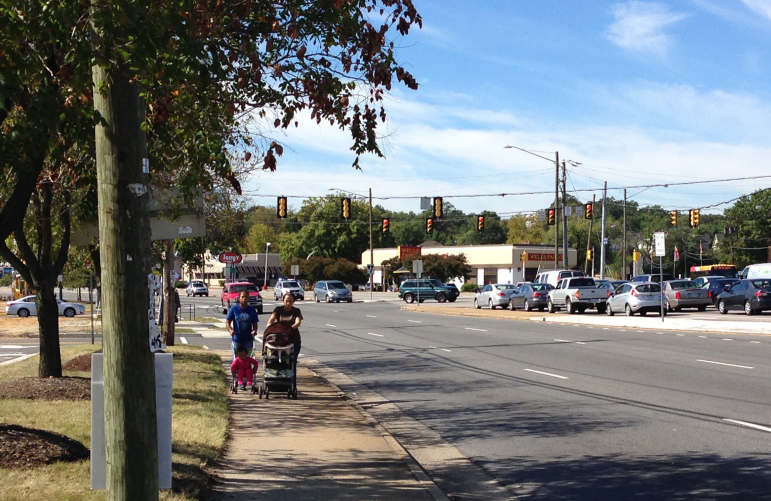 One of the goals of the Richmond Highway widening and BRT projects is to make the corridor a more walkable area. (Fairfax County image)

Northern Virginia Transportation Authority staff have recommended full funding for two requests from Fairfax County for projects at the heart of the Embark Richmond Highway initiative, the group announced Monday.

Both the $127 million request for the Route 1 widening project between Jeff Todd Way and Napper Road and the $250 million request for the Bus Rapid Transit project between the Huntington Metro Station and Fort Belvoir got the thumbs up from the NVTA staff. Nothing is final yet, however, as the NVTA — which is responsible for dispersing state funds for transportation projects in the Northern Virginia area — still has to make its final vote on June 14.

The recommendations come after a tense spring that saw the NVTA take an unexpected funding hit after the Virginia General Assembly passed a Metro maintenance funding bill that took money from the NVTA’s budget. Local politicians and business groups implored residents to send comments to the NVTA urging full funding for the Embark projects, and in the end the NVTA said it received more than 1,200 comments.

The full list of NVTA staff recommendations can be seen here. The two Richmond Highway corridor-related projects are among 60 total projects that the NVTA has assessed as part of its FY2018-23 Six Year Program. The combined price tag of those requests is $2.5 billion, according to the NVTA.

The widening project and the BRT project — which are each key parts of the Embark plan to reshape transportation along the Route 1 corridor — were ranked first and second by Fairfax County when it sent its funding wish list to the NVTA back in December. Total costs for the projects are currently estimated at $215 million for the widening and $524 million for the BRT project.

The Route 1 widening project, which is currently in the design phase, will widen the road from four to six lanes between Hybla Valley and Fort Belvoir. It will also add dedicated bike lanes on each side of the road and a connected sidewalk system. The project, which is due to be completed in 2025, leaves room in the median for the future BRT which will run from Huntington to Fort Belvoir.

The BRT project is still in its early stages, with environmental evaluation and preliminary design underway. Eventually the county will apply for federal funding to help pay for the biggest chunk of the project. Construction will happen in two phases, with the second phase currently scheduled for completion in 2029.