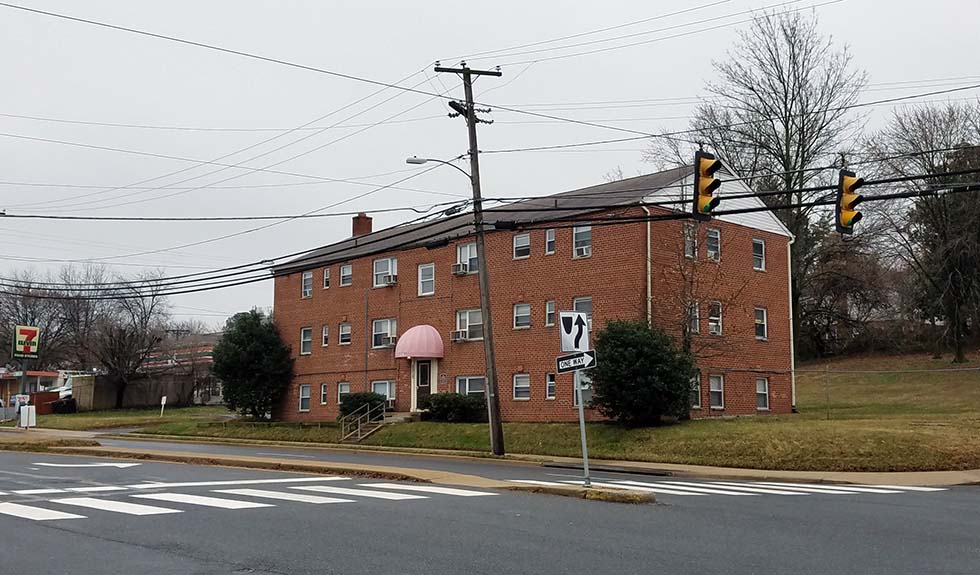 The Arden will be built at this location at the corner of Huntington Avenue and Biscayne Drive.

The Fairfax County Board of Supervisors voted last week to authorize two loans for a public-private affordable housing development near the Huntington Metro station.

The development, known as The Arden, will be constructed at 2317 Huntington Avenue (see map), which is currently the site of a 12-unit apartment complex built in 1950. Two vacant duplexes in the 2300 block of Glendale Terrace will also be torn down for the project.

The two county loans, totaling $7,400,000, will be made from the Fairfax County Redevelopment and Housing Authority to the Wesley Housing Development Corporation (WHDC). A nonprofit charitable organization, WHDC has helped develop 28 communities for low- and moderate-income residents since its founding in 1974, according to its website. The organization offers residents of its properties money management assistance and access to an employment specialist.

WHDC will secure additional funding for the development through tax credits and a first mortgage from the Virginia Housing and Development Authority.

“This is a really a wonderful addition to the community,” Mount Vernon Supervisor Dan Storck said after the vote, and noted that WHDC may relocate its headquarters to the development’s office space.

The Arden will consist of two buildings totaling 126 units, as well as additional space for retail or possible office use. One building will have 79 units, while the other will have 47 units and the retail/office space. The apartments will consist of studio, one-bedroom, two-bedroom and three-bedroom units.

A shared underground garage will be constructed for the two buildings.