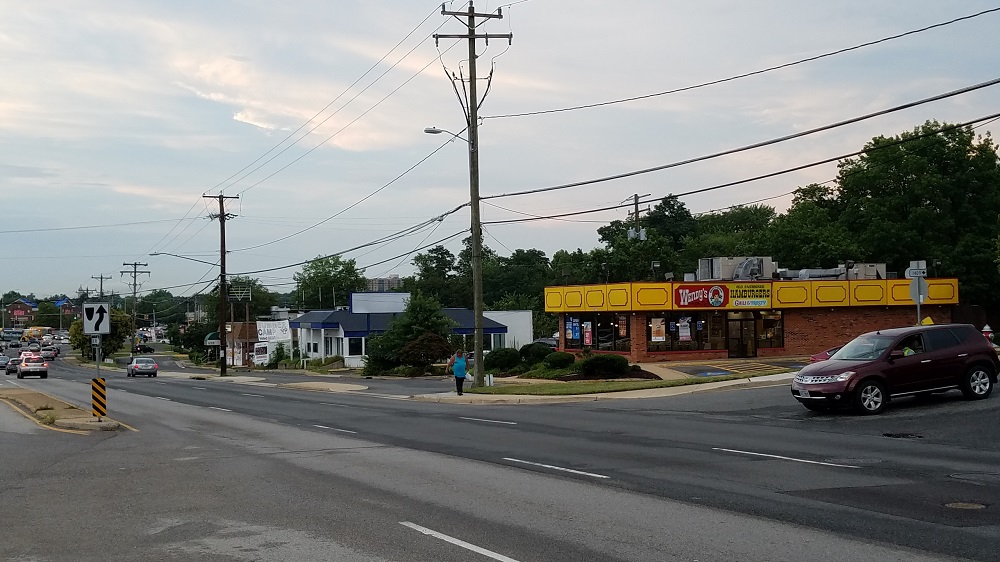 The site of the planned Kings Crossing multifamily residential development is currently occupied by a Wendy’s, a martial arts school and two vacant buildings.

The 350-unit Kings Crossing apartments will consist of a single building built on 5.29 acres of land just south of the Kings Crossing Walmart and north of Fairview Drive. The land is currently composed of four older commercial buildings, including a Wendy’s and a martial arts school.

“This development is crucial to the future of revitalization of Richmond Highway,” Mount Vernon Supervisor Dan Storck said in remarks prior to the vote.

Storck said the development of modern, amenity-rich complex was in line with guidelines laid out in the Embark Richmond Highway initiative, and showed the Route 1 corridor was “pivoting to the 21st century” and away from run-down commercial properties like those that currently occupy the Kings Crossing site.

The Kings Crossing application was approved by the Fairfax County Planning Commission last week, and has broad support from groups like the Southeast Fairfax Development Corporation, the Mount Vernon-Lee Chamber of Commerce, the Mount Vernon Council of Citizens’ Associations and the Spring Bank Community Association.

However the proposed development, which has been in the works for four years, did not get recommended by the county’s planning and zoning staff. The initial staff report raised concerns about 12 issues in the rezoning and development application, which caused the planning commission to defer a vote on Kings Crossing earlier this month. Eventually the list of concerns was negotiated down to three issues, including the developers contribution to the Fairfax County Park Authority and a planned loading dock on a private street to be built on the east side of the complex.

The planning staff again recommended denial of the application Tuesday, but Storck — as well as community members who spoke before the board — said the concerns were not big enough to hold the process up.

Katherine Ward, co-chair of the MVCCA, was one of the speakers who testified on behalf of the project. She said that while she understood the staff’s concerns, they didn’t rise to the level to hold up the project.

“We have actually been working with this developer since 2009,” Ward said. “Been a long time in coming, [and I] understand staff has some concerns. We believe the development itself overrides those concerns.”

More about the development

Size: Kings Crossing will be six stories (68.5 feet) at its highest point, including its entire northern facade. It will taper to four stories (40.5 feet) as approaches the nearby residential neighborhood.

BRT ready: The building will be offset from Richmond Highway in order to accommodate the future addition of Bus Rapid Transit (BRT) to Route 1 as part of Embark Richmond Highway.

New road: The new private road built on the east side of the complex will not connect to the Walmart shopping center next door.

Parking: The building’s parking garage is proposed to have 560 spaces. The above-ground garage will be accessed from the private street on the east side of the building.

Street improvements: Fairview Drive will not be widened, but a right-turn lane will be incorporated into the current right-of-way.

Mixed uses: The new building is zoned for mixed-use. Ground-level retail may be added later, but no specific plans have been mentioned yet.