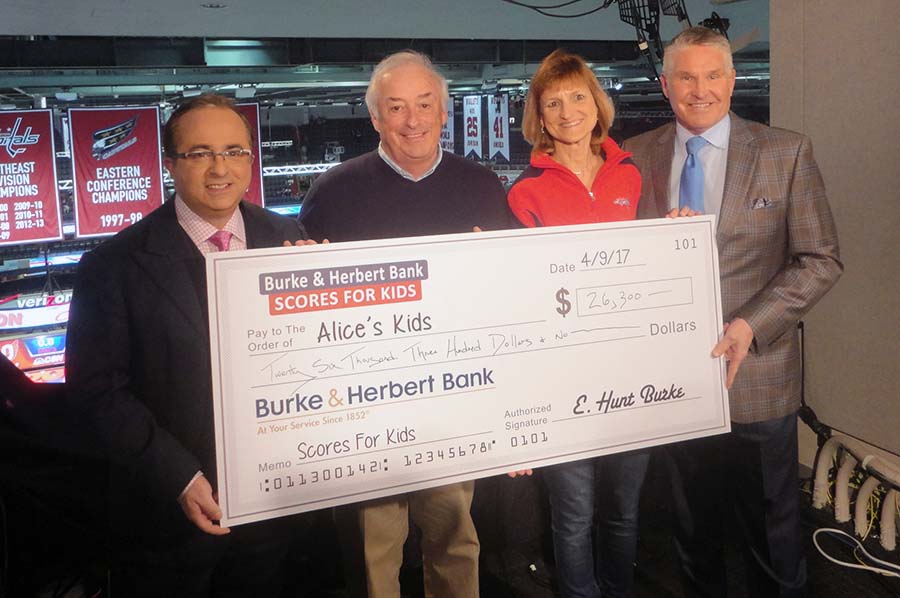 Mount Vernon resident Ron Fitzsimmons was watching TV one evening in early April when he got an email on his phone. Someone had donated to his charity, Alice’s Kids, triggering an automatic message.

The random burst of donations that Saturday evening left Fitzsimmons pleasantly surprised, but puzzled as to their orgin.

The next day Fitzsimmons got a call from a volunteer explaining that actor and comedian Patton Oswalt had retweeted a tweet mentioning Alice’s Kids — and then posted a picture of a receipt indicating he’d donated $5,000 to the charity.

“All of the sudden my email was like boom boom boom,” recalls Fitzsimmons, who estimates that $2,500 came in from followers of the comedian. “All of these people that follow Patton Oswalt were sending money.”

Dave Hellman, a volunteer for Alice’s Kids, is an Oswalt fan and triggered the whole chain of events by mentioning Alice’s Kids to the comedian during a Twitter discussion about charitable giving. Hellman said he wasn’t too surprised the comedian retweeted him, but said the donation and flood of retweets was more than he could have imagined.

“What surprised me was that he had made a donation, and the size of the donation,” said Hellman, an Alexandria resident who has helped Alice’s Kids make inroads in the city. “I would have just been happy getting publicity for Alice’s Kids.”

The Oswalt donation was the just latest bit of good fortune for Alice’s Kids in 2017. The charity, which typically relies on small donations from individuals, churches and businesses, has received a number of big donations this year.

But the most high-profile score for the charity came in early April when the Washington Capitals regular season ended. Burke & Herbert Bank and the team presented Fitzsimmons with a check for $26,300 —  $100 for each goal scored by the team in the 2016-2017 season — as part of the bank’s “Scores for Kids” program.

It marked the biggest donation to date for Alice’s Kids. Just as important, Fitzsimmons says, the arrangement with the Capitals provided the charity with publicity — announcers Joe Beninati and Craig Laughlin frequently mentioned the charity during games — and credibility that helped raise Alice’s Kid’s profile to another level.

“Someone texted me during a game [early in the season] saying they mentioned Alice’s Kids,” Fitzsimmons said. “And I kept getting text messages. I knew it was going to be big at that point.”

Burke & Herbert approached Fitzsimmons, a customer who’d asked the bank for donations previously, in 2016 about participating in Scores for Kids. More of a baseball fan, the huge potential of the donations-for-goals arrangement didn’t register right away.

“My first question was how many goals did they score last year,” Fitzsimmons said. When he heard the Caps scored 248 the previous season, Fitzsimmons did the math and was beside himself. “I said ‘What!?’”

The Capitals ended up scoring the third-most goals in the league en route to a division title in 2016-2017. Fitzsimmons and others at the charity quickly became big hockey fans as the goals began piling up.

“My board and me started watching the scores rather religiously,” said Fitzsimmons.

‘A feeling of exhilaration’

Fitzsimmons and his sister launched Alice’s Kids in 2011. They designed the charity to fill a very specific niche in the lives of children growing up in poverty. Alice’s Kids could provide smaller items, such as a Walmart gift card for new clothes or a check to cover the cost of prom tickets.

The idea is to help children in low-income families maintain their self-esteem and dignity by avoiding the “public embarrassment,” as Fitzsimmons calls it, that poverty often causes school-aged children in front of their peers.

The name and inspiration for the charity comes from Fitzsimmons’ mom, Alice. When Fitzsimmons and his brother and sister were young, their father walked out on the family. A once middle-class family became reliant on welfare and charity as Alice Fitzsimmons struggled to make ends meet.

Ron Fitzsimmons says the public suffering of those times — wearing the same clothes to school over and over, not being able to afford gym clothes or new sneakers — stuck with him. He says he missed a long stretch of school in the 9th grade because he just didn’t want to go.

He also remembers his mother taking side jobs in order to treat her kids to mini-shopping sprees. Those trips were a highlight in an otherwise hard time, and provided a thrill that he hopes Alice’s Kids can provide for kids today.

“[My sister and I] were reminded of that feeling of exhilaration,” Fitzsimmons recalls. “We thought maybe we could help some kids who were in similar situation.”

A former lobbyist with experience in both the political and non-profit worlds, Fitzsimmons has worked to build connections with local schools and community organizations and steadily grown Alice’s Kids into a high-profile charity.

Most work of the charity’s donations go towards kids in Fairfax County, but Alice’s Kids has recently began expanding into the city of Alexandria and other nearby localities.

Hellman, who became aware of Alice’s Kids through his wife, quickly became an evangelist for the group and has worked to connect Alice’s Kids to teachers and social workers in the Alexandria City Public Schools system.

Hellman says he’s seen the power that small donations can make in the lives of youngsters, and says Alice’s Kids provides an invaluable service to those working directly with the children.

“I get a little choked up just talking about it,” said Hellman. “[And] it takes some of the pressure off these teachers and social workers too.” 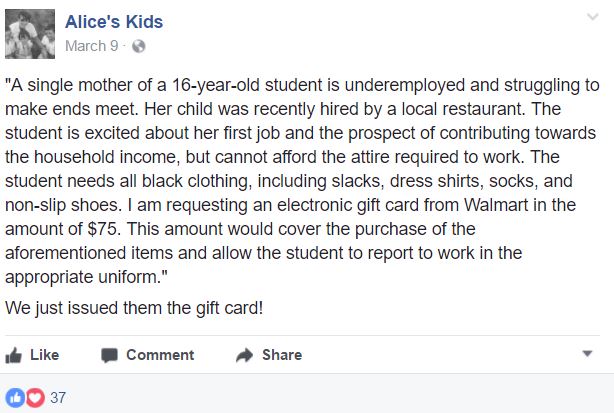 Alice’s Kids frequently posts examples of their giving on Facebook.

Fitzsimmons says his ultimate goal is to make Alice’s Kids go national. He’s recently begun working with the charity organization Communities In Schools to begin growing a network around the country.

“We want to continue to expand very slowly,” Fitzsimmons said, noting that the group has recently helped children as far away as Ohio, Texas and Georgia.

As Alice’s Kids grows, Fitzsimmons credits the generosity of the Richmond Highway area for making the organization what it is today. Asking for donations has always come easy to him, but the outpouring of donations he’s seen over the years continues to amaze.

“I’m from New York, I’m aggressive. It’s really easy for me to ask for money,” Fitzsimmons said. “[But] it just amazes me how generous people are in this community.”