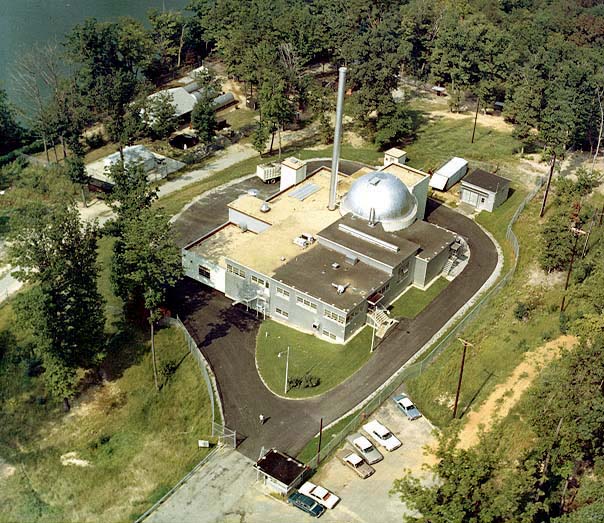 The SM-1 plant during its heyday.

It was 60 years ago this month that Fairfax County’s first — and only — nuclear reactor went into operation at Fort Belvoir.

SM-1, as the two-megawatt reactor was formally known as, operated from 1957 to 1973 on the Army post. SM-1 was a prototype for small “package” reactors that could be used to power military bases in remote locations.

The reactor reached “criticality” — meaning it was producing sustained and stable nuclear reactions — on April 8, 1957. A public ceremony to open the facility was held later that month.

SM-1 was the first nuclear reactor to connect to the commercial electrical grid, although due to its small size it was primarily used as a power source on the post itself.  It was also used for years as a training facility for nuclear power plant crews from all branches of the armed forces.

In March 1973 the reactor was shut down, and the facility was deactivated over the next two years. In 1975 it reopened as a museum, but that closed sometime in the 1980s.

The shell of the facility is still intact, sitting on the southeast part of Belvoir near Gunston Cove. The cooling tower and dome are visible from the Potomac River.

The facility is set to be fully dismantled sometime around 2030, according to the Museum of the U.S. Army.

See the Army Corps of Engineers Fact Sheet on SM-1.