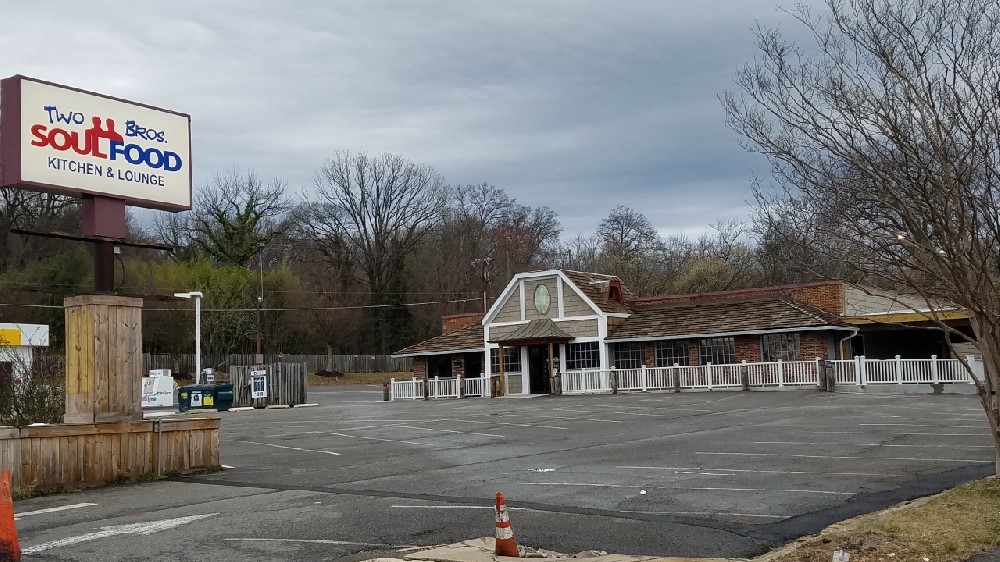 Two Brothers Soul Food hopes to open up for business in early April.

Growing up on Richmond Highway back in the 1980s and 1990s, David Roundtree and Chris Everette knew that if you wanted a good meal out, more than likely you had to get in the car and drive somewhere else.

Some residents might argue that not much has changed over the years. But thanks to Roundtree and Everette, diners along Richmond Highway will soon get a unique new option with Two Brothers Soul Food, which is tentatively scheduled to open the first week of April.

“That was one of the things we wanted to change,” said Roundtree, who grew up in Hybla Valley. “You don’t have to go to D.C. or Maryland to get [good food].”

Roundtree and Everette, 1989 and 1990 West Potomac graduates respectively, are entrepreneurs making their first foray into the restaurant business. They’ve hired a well-regarded chef and have a simple plan for the restaurant: Good food and good hospitality.

Running the kitchen at Two Brothers will be Andre Rush, a Mississippi-born chef who was an award-winning culinary artist and ice sculptor while serving in the Army. Rush’s experience includes stints at the United States Military Academy at West Point as well as the White House.

Two Brothers was originally going to be a take-out only restaurant a few blocks south. The owners put up their sign in 2015, but plans to open up fell through due to issues with parking at the small shopping center, Roundtree said.

The new location at 7305 Richmond Highway is much larger, and has been home to many restaurants over the years. Longtime residents remember it most as a Shakey’s Pizza Parlor. In recent years various eateries have cycled through the site — Captain White’s Crab House, Calabash, El Ranchon– with little success.

If a recent Friday at Two Brothers is any indication, the new restaurant has already created a buzz along the highway. During our reporter’s 30-minute visit to the restaurant, at least three groups of customers walked in the front door of Two Brothers asking if it was open yet. Roundtree and Everette say it happens as many as 10 times a day.

Right now Roundtree and Everette are finalizing their ABC license and finishing up the interior and exterior renovation. The restaurant will have a 150-person capacity, with both a large indoor dining area and a covered outdoor patio. There’s also two 8-seat bars, a DJ booth and an area for performers.

While live musicians will play at Two Brothers, the owners were quick to say the restaurant won’t have a club atmosphere.

“Absolutely no go-go,” Roundtree joked. He and Everette say they’re looking to cultivate a family-friendly environment where people can watch games on the weekend, maybe sing karaoke on weeknights and just relax and have fun.

“We want to keep this as family-oriented as possible,” said Everette.