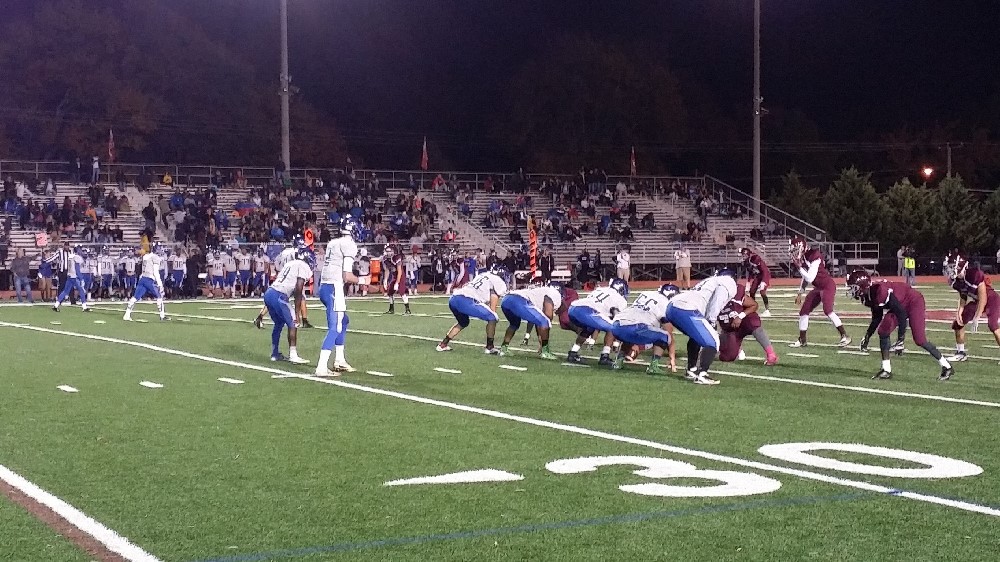 Five different West Potomac players scored touchdowns en route to a 45-14 blowout win over rival Mount Vernon on Friday night. The game marked the end of the regular season for both teams, who will now head into the Division 6A playoffs.

West Potomac (8-2) used a balanced attack on offense and made timely plays on defense to jump out to an early lead on Mount Vernon (5-5). The Wolverine offense displayed a full array of weapons, with two different running backs and three different receivers scoring.

Senior wide receiver Brandan Lisenby, who hauled in one of the TD throws from quarterback Mark Ellis, said the Wolverines entered the game full of confidence after knocking off South County last week.

“We knew [Mount Vernon] was a good team,” Lisenby said. “But I think we felt that if we just play our game, we can play with anyone we want to.”

The Wolverines jumped out to a 7-0 lead before the crowd even settled into their seats, scoring on a Justine Annan run on the game’s third play. Mount Vernon marched down the field on the ensuing possession, but West Potomac’s defense held the Majors on fourth down deep in their own territory.

A few plays later, West Potomac senior quarterback Mark Ellis hit Khalil Williams-Diggins for a long touchdown, and the rout was on. Ellis would go on to throw touchdowns to Lisenby and Da’Jon Bellfield, and Annan would run for another touchdown as the Wolverines headed into halftime up 35-7.

Junior running back Daiimon Cleveland sealed the win with a TD run on West Potomac’s first drive of the second half, putting the game well out of reach and allowing the Wolverines to rest some of the starters late in the third quarter.

Prior to the game, Wolverine coach Jeremiah Ross said he challenged his team to play to their potential, and afterward he was pleased with his squad’s performance.

“I just really wanted to see our guys go out there, execute the game plan and play to our level.” Ross said. “It’s about us doing our job, playing hard, being physical for four quarters, doing the best that we can do.”

A rematch with T.C. Williams now awaits West Potomac. Three weeks ago the Titans scored in the final minute to hand the Wolverines a 22-21 loss.

Last season West Potomac won its first-round playoff game before being dispatched by South County. Lisenby said the playoff disappointment hardened the Wolverines, and thinks this year’s squad is peaking at just the right time.

“I think everything is starting to come together, Lisenby said. “Our defense is playing great, and I think we’ve got one of the best offenses out here.”

Note: Mount Vernon coach Monty Fritts tweeted after the game that the Majors will be playing at Centreville next week. Hayfield lost their regular season finale to Madison, and will host Patriot next week in their first-round playoff game.