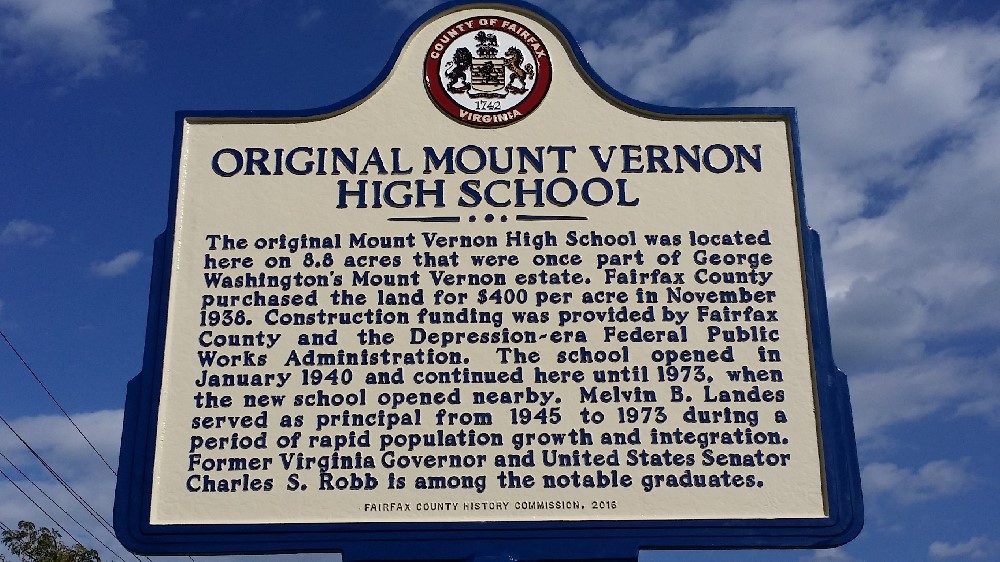 The sign now stands in front of the original Mount Vernon High School on Richmond Highway.

A historic marker was unveiled Saturday morning at the original Mount Vernon High School during a ceremony attended by local officials, alumni and community members.

Mount Vernon was only the third high school in Fairfax County when it opened in 1940. In 1973, Mount Vernon moved to a new facility down the road, and from 1973 to 1985 the building used for Walt Whitman Middle School. From 1985 to 2016 it was leased by the Islamic Saudi Academy (ISA).

ISA moved to a new location earlier this year, and now the building is mostly vacant. The county is currently in the planning phase for a project that will figure out the best uses for the building and surrounding campus. The schools’ gymnasium has already been renovated and was reopened two weeks ago for use by the South County Teen Center, which is located across the street.

Read local history author and Groveton resident Jay Roberts talk about the history of the site and the potential for its future in his Jaybird’s Jottings blog.

Mount Vernon celebrated its homecoming by clinching its first playoff berth since 2013 with a 52-39 come-from-behind victory over Woodson on Friday night. The win improved the Majors’ record to 5-3, and snapped a two-game losing streak.

Mount Vernon junior quarterback Tim Heltzel was 21-35 passing for 340 yards and six touchdowns. Senior running back Mikel Gamble finished with 197 total yards and scored three touchdowns, two on receptions and one on an onside kick return in the fourth quarter to help seal the win.

The Majors travel to Lake Braddock this Friday for a showdown with the 7-1 Bruins, who are currently tied for first place in the Patriot District.

Hayfield shook off a penalty-filled first half to win its homecoming game Friday night against Yorktown.

Leading by only one at halftime, the Hawks exploded for 28 unanswered points to down the Patriots 42-13. Senior quarterback Jacob Keeney passed for three touchdowns and rushed for two more, including this 53-yard scamper in the fourth quarter to cement the victory:

And now the rout is on. @KidKeeney scores on a long run to put @hayfieldsports up 42-13 with 9:58 left pic.twitter.com/PNpZfH4Hem

Hayfield is now 7-1 on the season, and on Friday travels to South Lakes to face the unbeaten Seahawks in a collision of Liberty District heavyweights.

Almost a year after suffering a devastating injury against Purdue that ended his 2015 season, West Potomac graduate De’Mornay Pierson-El helped lead Nebraska to a 27-14 win over the Boilermakers on Saturday.

Pierson-El caught three passes for 69 yards and a touchdown, and made a key block on Nebraska’s first score. It’s a long way from the torn ACL, MCL, and hamstring that were so serious his 2016 season was in doubt. Read more on Pierson-El’s big game in the Lincoln Journal Star.